The pulling down of the Statue was a staged media event

The URL of this article is: http://globalresearch.ca/articles/NYI304A.html

See the Video of the Pulling down of the Statue

April 6th: Iraqi National Congress founder, Ahmed Chalabi is flown into the southern Iraqi city of Nasiriyah by the Pentagon. Chalabi, along with 700 fighters of his "Free Iraqi Forces" are airlifted aboard four massive C17 military transport planes. Chalabi and the INC are Washington favorites to head the new Iraqi government. A photograph is taken of Chalabi and members of his Free Iraqi Forces militia as they arrive in Nasiriyah.

April 9th: One of the "most memorable images of the war" is created when U.S. troops pull down the statue of Saddam Hussein in Fardus Square. Oddly enough... a photograph is taken of a man who bears an uncanny resemblance to one of Chalabi's militia members... he is near Fardus Square to greet the Marines. How many members of the pro-American Free Iraqi Forces were in and around Fardus Square as the statue of Saddam came tumbling down?

The up close action video of the statue being destroyed is broadcast around the world as proof of a massive uprising. Still photos grabbed off of Reuters show a long-shot view of Fardus Square... it's empty save for the U.S. Marines, the International Press, and a small handful of Iraqis. There are no more than 200 people in the square at best. The Marines have the square sealed off and guarded by tanks. A U.S. mechanized vehicle is used to pull the statue of Saddam from it's base. The entire event is being hailed as an equivalent of the Berlin Wall falling... but even a quick glance of the long-shot photo shows something more akin to a carefully constructed media event tailored for the television cameras.

We are including below the original pictures (enlarged)

As well as the pictures from the square, which certainly suggest that there were no large crowds present.

See the Video of the Pulling down of the Statue

confirmed by the BBC:

"Marines say that the US flag draped over Saddam Hussein's statue was the flag that was flying over the Pentagon on 11 September 2001. It was later replaced with the Iraqi flag after the people shouted for it.." (See BBC report, 9 April 2003)

The 9/11 flag did not get to Fardus square in Baghdad without a little bit of military planning.

There must have been a specific order emanating from the Pentagon, which allowed the Pentagon 9/11 flag to be transported to Baghdad as part of the propaganda ploy.

The flag --which symbolizes 9/11--  was, no doubt, slated to be used in some specific staged event. 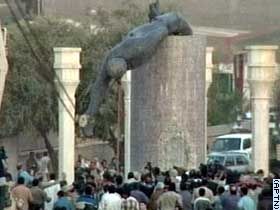